SABRINA (27) is suffering from Friedreich's ataxia, a disease that causes progressive damage to the nervous system.

She never thought that she would be able to have children. In 2009 she met KASPAR (24) who was doing his community service at the dorm for disabled people, where she still lives. They fell in love and soon she became pregnant. The doctors said that she might die, if she gave birth, so Sabrina decided to have a Caesarean section: LUIS was born.

But the happiness didn´t last. Kaspar met another woman. They seperated from each other and Luis stayed at his mother´s. Since then Kaspar sees their son every second weekend and Sabrina lives as a single parent with Luis. Nevertheless Sabrina says that Luis gives her life purpose and meaning.

A documentary about love between mother and child and hope that comes with it. 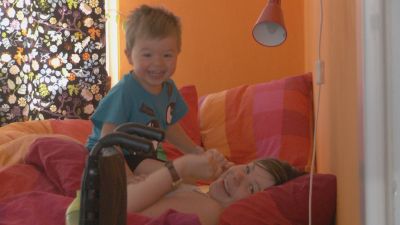